The Scottish Education Act of 1872 created a national system of compulsory elementary schools. Prior to this the churches had financed the Scottish parish school system. However, the churches could no longer support the burgeoning school populations of the late 19th century and the state intervened. This legislation effectively sanctioned the creation of a secular school curriculum with religious instruction as an appendix. The 1872 Act also furnished schools with a statement of support for Religious Instruction and Religious Observance. It also provides the first mention of a conscience clause for parents giving them the right to withdraw their child from Religious Instruction.  To this day, the 1872 act provides the legislative framework for RE in Scottish schools.

As far as Roman Catholic schools are concerned, these were first founded in the early 19th century to meet the needs principally of immigrating Irish Catholics, mainly in the areas of the industrial west of Scotland. The numbers of voluntary catholic schools increased towards the end of the 19th century. However the catholic schools rejected the 1872 Act’s attempt to create centralised control of policy out of fear that the denominational nature of their schools would be eroded. In 1918, however, the catholic schools came under state control, mainly as a result of financial need, but also reassured that they would maintain theological autonomy. At present approximately 15% of schools in Scotland are catholic, although many of their pupils may be from non-catholic backgrounds.

The provisions of the 1872 Act on Religious Instruction were upheld on various occasions throughout the 20th century, from the 1929 Parliamentary provision right though to 1991 (SOED Circular 6/91). In 1943 the Secretary of State for Scotland supported the freedom of conscience for parents; the freedom of curricular planning for teachers, and the withdrawal of state control in such matters.

From 1945-1968 the Scottish Joint Committee for Religious Education (SJCRE) published a series of ‘experimental’ syllabi for Religious Education (RE, as it was now called), as well as guidance on the use of graces and hymns in schools. The SJCRE, as a Church of Scotland affiliated body, sought to ground RE entirely in Christianity, making no distinction between learning about Christianity, and the administration of acts of worship. Both were seen to be the proper role of RE, and both were sanctioned by these documents.  It is noticeable, however, that these documents increasingly become concerned with a more objective treatment of the content. There is, for example, a move away from 1954’s ‘Graces for Use at School Meals’ which expected pupils to participate in grace as a matter of course, to the material in the 1968 ‘Second Experimental Syllabus’ which, while inviting pupils to consider the purpose and nature of Christian prayer, does not invite them to pray.
A number of events and trends led to a perceived crisis in Scottish Religious Instruction in the 1960’s. Until this point Religious Instruction was carried out by non-specialist teachers in primary and secondary schools and was firmly centred on Bible reading. The incongruity of RE provision, as it existed at the time, came to a head for 4 main reasons
​The report of Millar’s Committee questioned the situation where RE remained mandatory but where there was no inspection and no teaching qualification or certification for pupils. RE had not been able to keep pace with developments elsewhere in the curriculum and “in the attitude of our society to religious belief.” Scottish census data, which has included questions on religiosity since 2001 charts a move from majority Christian affiliation: 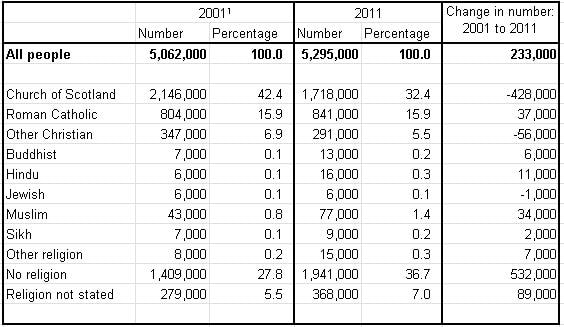 Source: http://www.scotlandscensus.gov.uk/documents/censusresults/release2a/StatsBulletin2A.pdf (accessed 1st March 2016)
​The Millar Report can be summarised as recommending educational, non-confessional, inspected RE delivered by specialist staff. It also acknowledged that in advocating non-confessional RE, on the grounds of respect for freedom of thought and because of the multi-faith society, that there is a tension between this and the continuation of acts of worship in schools. Given the statutory restrictions placed on Millar Committee (1972) this is understandable. However, the uneasy relationship between RE and Religious Observance (corporate acts of worship in schools) continues to be problematic. In some schools to this day the two are conflated and in other schools Religious Education staff continue to feel undermined by the persistence of acts of worship.
In 1982 national certification for RE was introduced for third and fourth year pupils in the secondary   school (ages 14-16). The content would provide a rough template for RE qualifications to come in that it posited 4 areas of study (in addition to a personal investigation by pupils):From 1999 Scottish secondary schools have been offering Religious, Moral and Philosophical Studies (RMPS) single units from the national qualifications suite, rather than courses, down the school at secondary third and fourth year during mandatory RE time, which is typically an hour a week. In 2010 across Scotland 35,595 RMPS units were offered discretely in Scottish schools, predominantly in third and fourth year core RE time, rather than as an elective (ibid.). The majority (25,503) of these concern morality and values. Only 4,820 of the total units concerned the study of a selected world religion. The remaining units (5,272) cover material such as the relationship between religion and science, the nature of belief and the existence of God. This increase in certificated provision in RE may be part of a drive to enhance the credibility of RE in schools. The prevalence of units dealing with moral philosophy, philosophy of religion and philosophy of science (30,775 out of 35,595) is evident here and may reflect on teachers’ perceptions that such content may sit better with an increasingly secular pupil population. The desire, by some non-denominational RE teachers to rebrand the subject RMPS may also be born of this perception.
​The latest national initiative is the Curriculum Review (A Curriculum for Excellence 2005 - present). RE has one of several subject review committees currently looking at the national curriculum. ‘RME’ has been acknowledged as one of 8 ‘Curriculum Areas’ that should inform curricular planning. Curricular ‘experiences and outcomes’ were created for Catholic and non-faith RE in 2008, though it should be noted that, despite this separation of provision at core level, children from Catholic and non-faith schools are presented for the same national qualifications and that this has been the case since the creation of RE certificates in the 1980’s.

During the SQA exam diet for session 2013-14 4,318 pupils underwent Higher RMPS in the latter two years of their secondary schooling. Across Scotland, thousands more have been awarded discrete units. Although these numbers are not yet close to those in comparable social subjects (Modern Studies (Politics) had 8,929 Higher candidates in 2014) they do represent a year by year increase in uptake. For example there has been an increase of 2,212 pupils taking RMPS Higher since session 2007-2008. This represents a 95% increase in uptake over a period of six years.
Key Links:            education.gov.scot/Documents/rme-pp.pdf (non-denominational)
education.gov.scot/Documents/rerc-pp.pdf (Catholic)            www.gtcs.org.uk/web/FILES/about-gtcs/memorandum-on-entry-requirements-to-programmes-of-ite-in-scotland.pdf            files.eric.ed.gov/fulltext/ED558112.pdf
This report was written by ​Graeme Nixon, the EFTRE representative for Scotland - October 2018